That's a WRAPPPP on Production!

Hey Everyone
For those of you who do not know, we have officially wrapped production on "Between the Forest and the Field"! We shot the film over the span of 7 days and we could not be happier with how the footage is looking, this is thanks to an amazing job done by both the cast and the crew!
This means that we are officially in post production! We are very lucky enough to have AFI 2nd year and editor extraordinaire Varun Viswanath cut the film. We have spent the past week watching dailies and getting ready to start put things together. The hope is to have a first cut of the film by the beginning of December and a teaser of the film out by Christmas.
In the mean time check out the films facebook page (link below) for all NEW set pictures. Please "like" the film and help spread the word!
http://www.facebook.com/pages/Between-the-Forest-and-the-Field/143913362370582
In the mean time enjoy this picture from a night exterior we shot on Day 4! Thanks and until next time, all be well!
-Ben 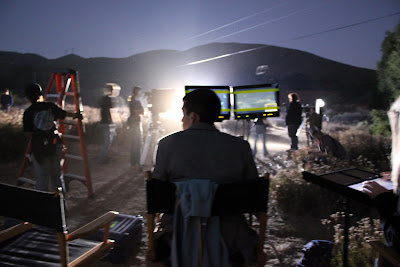